Speke Airport opened in 1930. After the completion of a massive redevelopment in 2002, the airport was renamed Liverpool John Airport in honour of the famous Beatle. It currently handles around 5 million passengers every year and is the leading low-cost airport in the North of England. The IATA code for Liverpool John Lennon Airport is LPL.

There’s a good choice of hotel accommodation in and around Liverpool John Lennon Airport. Options include the Hampton by Hilton, Premier Inn, and Holiday Inn Express.

The Hampton by Hilton is situated next to the terminal building and offers 160 guest rooms, a bar, a fitness centre, free wireless internet access, and car parking.

For train times and fares to and from Liverpool South Parkway visit National Rail Enquiries.

Terravision run a coach service between Liverpool John Lennon Airport and Manchester city centre. The stops in Manchester are on Sackville Street and at the Shudehill Interchange (near Manchester Victoria train station).

Drivers with satellite navigation systems should note that the postcode to use for Liverpool John Lennon Airport is L24 1YD.

Cars picking up passengers need to park in the short stay multi-storey car park. Parking charges are £2 for 20 minutes, £3.50 for 40 minutes, and £5 for 1 hour.

A range of long stay car parking options can be booked on the official airport website.

Car rental companies operating at the airport include Alamo, Avis, Budget, Enterprise, Europcar, Hertz, and National. All are situated on the ground floor of the short-stay multi-storey car park, directly opposite the terminal building.

Hackney cabs are available right outside the terminal entrance. 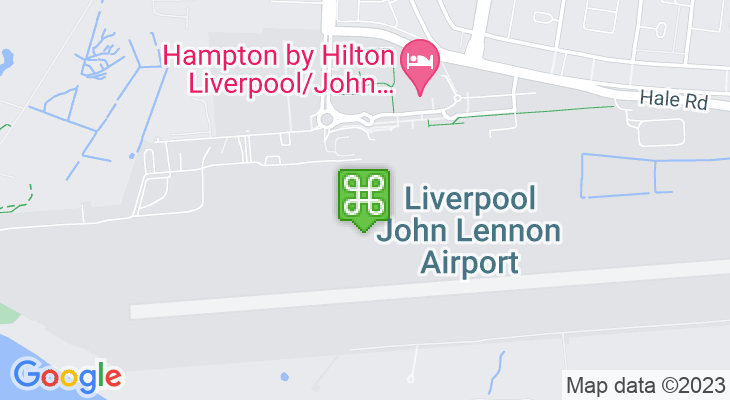