Hurst Green is a pretty village in the Ribble Valley, Lancashire. It is best known for being home to Stonyhurst College, the famous Roman Catholic public school.

The village lies on the southern edge of the Forest of Bowland Area of Outstanding Natural Beauty.

During the Industrial Revolution Dean Brook was home to a number of bobbin mills. These supplied wooden bobbins for the spinning and weaving machines in Lancashire’s cotton mills. They were located here due to a good supply of timber and a fast flowing stream to power water wheels.

Many of the community living here now are involved in farming or tourism. Some commute to jobs in Clitheroe and Preston.

In 1592 Sir Richard Shireburn began construction of Stonyhurst Hall on the site of earlier manor house. Work was continued by his descendants. Sir Nicholas Shireburn, added classical features, the ponds, and formal landscaping.

In 1754, Maria Howard (nee Shireburn), Duchess of Norfolk and daughter of Sir Nicholas Shireburn passed away. She was the last of the Shireburn family so the estate passed to Edward Weld, her first cousin once removed.

In 1794, advancing French Revolutionary Army Forces, forced the Society of Jesus (Jesuits) to vacate their school in Liege. Thomas Weld, son of Edward Weld, invited them to establish a new school at Stonyhurst. Stonyhurst College received its first pupils in August 1794.

Stonyhurst had fallen into a state of disrepair and had been unoccupied for a considerable period. Thomas Weld was a wealthy philanthropist and former pupil of the Jesuit school. He resided at Lulworth Castle in Dorset and had no need for Stonyhurst.

The new occupants restored the building and extended it. One of the most notable additions was St Peter’s Church. The Grade I Listed Building was completed in 1835 and bears a resemblance to King’s College Chapel in Cambridge.

The Church of St John the Evangelist stands on the western side of the village. The Anglican church was built in 1838 and is a Grade II Listed Building. The tower features a battlemented parapet.

Shireburn Cottages were built in 1706 by Sir Nicholas Shireburn as almshouses. Almshouses were built to provide home for the poor and vulnerable before social housing became the responsibility of the authorities. They were originally sited on Longridge Fell. In 1946 they were demolished and rebuilt on Avenue Road in Hurst Green.

There is a small village green near the junction of Avenue Road and the B6243. A war memorial bears the names of locals that died in World War I and World War II.

JRR Tolkien, author of The Lord of The Rings, was a frequent visitor to the village in the 1940s.

In 1939 his son, John Tolkien, was studying to be a priest at the English College in Rome. In 1940, World War II led to college temporarily relocating to Stonyhurst College.

JRR Tolkien often visited his son at Stonyhurst. He stayed at New Lodge, a house within the grounds of the school. Significant parts of The Lord of the Rings were written here.

It is thought The Shire area in the The Lord of the Rings may have been based on Hurst Green. There’s a Shire Lane in Hurst Green that predates the book. The Shire’s River Shirebourne bears a similar name to the former owners of Stonyhurst Hall.

The layout of the nearby, converging Hodder, Calder, and Ribble rivers is similar to the layout of Tolkien’s map of the Brandywine, Withywindle, and Shirebourne rivers.

At the time of his visits, the Hacking Ferry carried passengers across the River Ribble. It could have been the given him the idea for the Bucklebury Ferry. Brandy Hall, Frodo’s childhood home, is thought to be based on nearby Hacking Hall and the Brandywine Bridge on Cromwell’s Bridge.

The Tolkien Trail is one of the most popular walks in Lancashire. It starts at The Shireburn Arms Hotel, an inn frequented by Tolkien.

The 6½ mile route passes Stonyhurst College and includes sights such as Cromwell’s Bridge, the River Hodder, the River Ribble, and Hacking Hall. Throughout the walk there are splendid views of Pendle Hill.

Hotels and places to stay in and around Hurst Green include:

Bus services to Hurst Green include the 5 from Clitheroe to Chipping. It calls at Barrow, Whalley, Hurst Green, Ribchester, and Longridge.

Hurst Green lies on the B6243, the road linking Preston to Clitheroe.

Free street parking is available around the village.

There is no train station in Hurst Green. Nearby stations include Clitheroe, Whalley, and Langho.

The closest major station is Preston. It is on the West Coast Main Line. 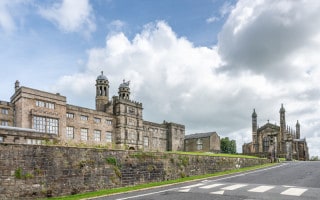 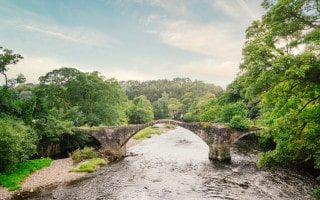 Old bridge over the River Hodder. Oliver Cromwell and his army crossed the bridge on their way to fight the Battle of Preston.