Macclesfield is a busy market town on the banks of the River Bollin in east Cheshire. Situated between Cheshire Plains and the Peak District the town is surrounded by fabulous scenery.

The town is famous for its once thriving silk industry and boasts the only Silk Museum in the UK. More recently Macclesfield has become renowned for its connections with the cult band Joy Division.

Macclesfield’s importance as a silk manufacturing town is explored at the Silk Museum. The museum is spread over 3 sites; the Park Lane Galleries, Paradise Mill, and the Heritage Centre.

The Park Lane Galleries is housed in a building on Park Lane that was once the Macclesfield School of Art. Exhibitions explore silk production, silk worms, and design.

The Paradise Mill, also on Park Lane, was built in the mid-19th century and was a commercial mill up to 1981. It is now a working museum with 26 restored Jacquard handlooms.

The Heritage Centre on Roe Street features an audio-visual presentation tracing the development of the town’s silk industry and a collection of 18th and 19th century costumes.

The West Park Museum lies within West Park and was donated to the town at the end of the 19th century by the Brocklehurst family. It holds a collection of ancient Egyptian artefacts collected by Marianne Brocklehurst on her visits to Egypt, It also houses a selection of works by Charles Frederick Tunnicliffe (1901 – 1979), a renowned wildlife artist born in Langley, near Macclesfield and a stuffed panda, shot by Captain HC Brocklehurst on a trip to China.

West Park is just north of the town centre and was one of England’s earliest public parks when it opened in 1854. Facilities here include a café, ornamental gardens, children’s play area, and the largest bowling green in the country.

For more information about the Silk Museum and the West Park Museum visit the Macclesfield Silk Museums website.

Gawsworth Hall is one of Cheshire’s finest timber-framed black-and-white style houses. The Grade I listed country house is the home of the Richards family and in the summer months hosts a fantastic programme of concerts, theatrical performances, comedy shows, and other events.

Capesthorne Hall is another magnificent country house in the area. It also offers a number of shows and festivals throughout the year.

The Lovell Telescope at the Jodrell Bank is one of Cheshire’s most iconic and significant structures. The new Jodrell Bank Discovery Centre opened here in 2011.

National Trust Properties in the area include Quarry Bank Mill in Styal Country Park, the garden at Hare Hill, and the sandstone escarpment at Alderley Edge.

Despite its moderate size, Macclesfield does not have a commercial multiplex cinema. The only cinema in town is the Cinemac film theatre at the Heritage Centre. It features one 280-seat auditorium. The town does, however, offer a 24-lane tenpin bowling alley.

Macclesfield Golf Club is one of the oldest courses in Cheshire and boasts spectacular views of the Cheshire Plain. Other courses in the area include those at the Shrigley Hall Hotel and the De Vere Mottram Hall.

Macclesfield Town FC is the town’s professional football team. They play their home fixtures at the Moss Rose stadium.

Macclesfield is often nicknamed Treacle Town, in reference to a centuries old incident when a carriage spilt its cargo of treacle on the street. Supposedly the townsfolk rushed out of their houses to scoop it off the cobbles.

Today, the Treacle Market is held in the Market Place on the last Sunday of each month and features stalls selling local food and drink, artwork, and antiques. Macclesfield also hosts weekly outdoor markets on Tuesdays, Fridays, and Saturdays, plus an indoor market, open every day of the week except Sunday.

Mill Street is the main shopping street in Macclesfield. It has a good selection of high street names including Burton, Early Learning Centre, Marks & Spencer, Mothercare, New Look, Next, Peacocks, and River Island.

Independent shops include Arighi Bianchi, arguably the most famous furniture store in Cheshire. The 65,000 sq ft store features 30 showrooms and was established in the late 19th century by an Italian immigrant. It is still owned by his descendants.

Hotels and places to stay in and around Macclesfield include:

The A538 connects Macclesfield to Wilmslow, Manchester Airport, and the M56 motorway while the A523 links the town to Stockport and Manchester.

There are plenty of car parks in Macclesfield town centre. A full list, together with charges, is available on the Cheshire East Council website.

Macclesfield train station is situated to the east of the town centre (address and postcode: Waters Green, Macclesfield SK11 6JP) and is on the West Coast Mainline.

Virgin Trains operates a service from Manchester Piccadilly to London Euston that calls at Stockport, Macclesfield, and Stoke.

The Northern Rail train from Manchester Piccadilly to Stoke stops at Stockport and Macclesfield.

The journey time between Manchester and Macclesfield is around 30 minutes. The train from London to Macclesfield takes around 1¾ hours.

For train times to and from Macclesfield and ticket prices visit the National Rail Enquiries website. 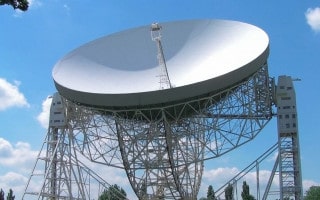 Explore the wonders of the universe and learn about the giant Lovell Telescope.