Castlefield is an area to the southwest of Manchester city centre, bounded by St John’s, Deansgate, and the River Irwell.

The area was first settled by the Romans. In 79 AD they built a fort here to guard roads to Chester, York, and Ribchester. A reconstruction of Mamucium is now one of the main attractions in the area.

Castlefield is the Manchester terminus of the Bridgewater Canal. It was built in the 1760s by the 3rd Duke of Bridgewater to carry coal from his mines in Worsley to the city.

The success of the Bridgewater Canal promoted the construction of the Rochdale Canal from Manchester to Sowerby Bridge in West Yorkshire. On completion in 1804 the two canals were connected at Castlefield.

The Liverpool and Manchester Railway opened in 1830. It was the world’s first intercity railway. Manchester Liverpool Road Railway Station was the Manchester terminus of the line. Situated at the northern end of Castlefield, it is now the site of the Science and Industry Museum.

In the latter half of the 19th century railways replaced canals as the major mode of transport. An impressive series of viaducts was built to carry trains into the city.

In the 20th century the area fell into disrepair. In 1982 the area became the UK’s first Urban Heritage Park. With the help of millions of pounds of public sector funding, an extensive regeneration programme commenced.

Many of the warehouses and buildings at Castlefield have now been converted into bars, restaurants, hotels, apartments, and offices.

Additions included Merchant’s Bridge. This impressive pedestrian footbridge crosses the Castlefield Basin, the junction of the Bridgewater Canal and Rochdale Canal. Walks along the canal footpaths and across the bridge are particularly pleasant in the summer months.

Another development was the Castlefield Bowl. This outdoor events venue used for concerts, festivals, and screening major sporting events.

Hotels and places to stay in and around Castlefield include:

Castlefield has an excellent selection of places to eat and drink.

Deansgate is the nearest train station.

Piccadilly Train Station is around 1 mile away. A free bus service leaves from outside the station and stops in Castlefield.

A map of Castlefield is shown below. Click on any point of interest for additional information. 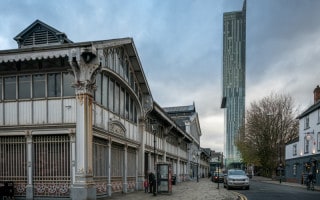 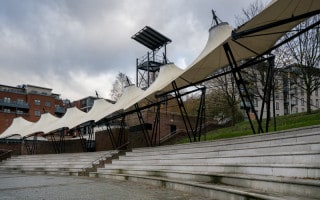 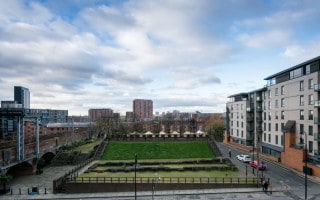 Reconstruction of a Roman Fort in Castlefield, Manchester. 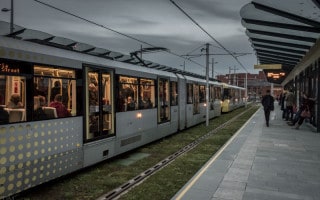