According to data from the UK's Office for National Statistics (ONS), the current population of Bury is 190,700.

Population statistics for Bury between 2011 and 2020, split by age group, are shown in the table below.

This represents a population growth rate of 2.86%.

In 2020, 38,700 children lived there, which was 20.29% of the total population. The percentage of children living in Bury in recent years has been rising.

In 2020, 117,000 adults lived there, representing 61.35% of the total population. The percentage of adults living in Bury in recent years has been declining.

There are currently more females than males in Bury.

Population statistics by gender for Bury between 2011 and 2020 are shown in the table below.

The census is a valuable source of information about the UK, providing statistics on population sizes and social trends.

The United Kingdom has conducted a national census every ten years (with several exceptions), starting in 1801.

The census data provides a detailed view of the UK. Data from the census is used to help run public services, develop policies, and allot funding.

The statistics from the 2021 Census for England, Wales, and Northern Ireland will be issued in summer 2022.

The census before this was held in 2011. Population statistics for Bury are detailed below.

As of today, the most recent published UK Census data was for 2011. Results of the 2011 United Kingdom Census showed that the total population of Bury was 185,060.

Bury covers an area of 9,948 hectares. The population density was 18.60 persons per hectare.

Bury has a higher percentage white population than the average for England (85.42%).

Asians were the second-largest ethnic group in Bury. 13,407 (7.24%) of the population identified as Asian.

Bury has a lower percentage Asian population than the average for England (7.82%).

Bury has a higher percentage Christian population than the average for England (59.38%).

Muslims were the second-largest religious group in Bury. 11,279 (6.09%) of the population identified as Muslim.

Bury has a higher percentage Muslim population than the average for England (5.02%).

The metropolitan borough is bounded by Rochdale to the east, Manchester and Salford to the south, Bolton to the west, Rossendale to the north, and Blackburn with Darwen to the northwest. 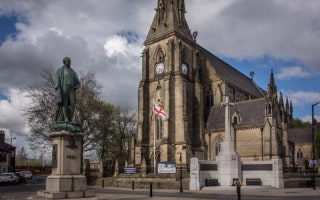 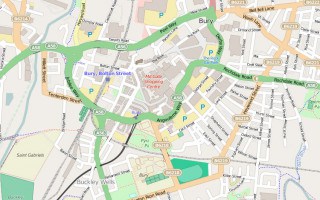