The current population of Salford (metropolitan borough) is 262,700.

The population of Salford grew rapidly during the Industrial Revolution, rising from around 29,000 in 1801 to approximately 89,000 in 1841. People moved here from other areas of the UK to seek work in the textile industry.

Population growth continued throughout the latter half of the 19th century and the first decades of the 20th century. In 1894, the opening of the Manchester Ship Canal and Manchester Docks (Salford Docks and Pomona Docks) brought further employment to the area. By 1931 the population of Salford had peaked at around 334,000.

Increased competition from overseas in the first half of the 20th century devastated the area’s textile industry. During the 1970s the Manchester Docks declined as the Manchester Ship Canal could no longer accommodate the larger container ships which were becoming dominant in international trade. The docks closed in 1982, and the area was left derelict.

The population of Salford has increased in recent years, partly due to redevelopment.

In 1983 Salford City Council purchased the Salford Docks part of the Manchester Docks. The area was rebranded as Salford Quays and redeveloped. It now includes numerous housing developments, hotels, The Lowry, the Imperial War Museum North, and a shopping mall. MediaCityUK is home to the BCC and other broadcasters.

More than 20,000 students are enrolled at the University of Salford. Salford Museum and Art Gallery is adjacent to its main campus.

According to data from the UK's Office for National Statistics (ONS), the current population of Salford is 262,700.

Population statistics for Salford between 2011 and 2020, split by age group, are shown in the table below.

This represents a population growth rate of 12.03%.

In 2020, 53,200 children lived there, which was 20.25% of the total population. The percentage of children living in Salford in recent years has been rising.

In 2020, 172,900 adults lived there, representing 65.82% of the total population. The percentage of adults living in Salford in recent years has been declining.

There are currently more males than females in Salford.

Population statistics by gender for Salford between 2011 and 2020 are shown in the table below.

The census is a snapshot of the United Kingdom that includes important data on population figures and social changes.

Censuses have taken place in the UK every 10 years since 1801.

Census statistics help paint a picture of the United Kingdom. Data from the census is used to help run public services, develop policies, and earmark funding.

The data from the 2021 Census for England, Wales, and Northern Ireland will be published in summer 2022.

The previous census was in 2011. Demographic information for Salford is shown below.

As of today, the most recent published UK Census data was for 2011. Results of the 2011 United Kingdom Census showed that the total population of Salford was 233,933.

Salford covers an area of 9,719 hectares. The population density was 24.07 persons per hectare.

Salford has a higher percentage white population than the average for England (85.42%).

Asians were the second-largest ethnic group in Salford. 9,429 (4.03%) of the population identified as Asian.

Salford has a lower percentage Asian population than the average for England (7.82%).

Salford has a higher percentage Christian population than the average for England (59.38%).

The Broughton area of Salford is home to a large Jewish community.

Salford is located in North West England, within the Greater Manchester metropolitan county.

It is bounded by Wigan to the west, Bury and Bolton to the north, and Trafford to the south.

Manchester lies directly to the east, across the River Irwell.

The borough is governed by Salford City Council, headquartered in Swinton. 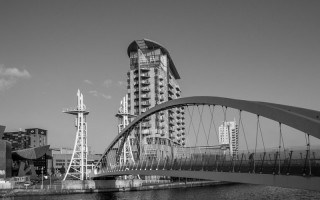