Rossendale is a borough in Lancashire comprising a number of former mill towns and villages. The major settlements in the area are the towns of Bacup, Rawtenstall, and Haslingden. Villages include Whitworth, Helmshore, Waterfoot, Crawshawbooth and Edenfield. The area is administered from Rawtenstall by Rossendale Borough Council.

The Weaver’s Cottage in Rawtenstall is one of several attractions in Rossendale that explores the area’s rich textile heritage. The building, managed by the Rossendale Civic Trust, is one of the last of its type in the country and offers displays exploring the history of weaving and the Industrial Revolution. Exhibits on the ground floor include mock-ups of a Victorian kitchen and clog shop, while the upper floor features a weaver’s loft with a traditional hand loom and a flying shuttle. The museum is open on weekend and bank holiday afternoons between Easter and the end of September.

Rossendale Museum is housed in a beautiful Victorian mill owner’s home in Whitaker Park in Rawtenstall. Many of the exhibits explore the area’s industrial heritage but there are also displays of fine art and furniture and a natural history collection that includes stuffed animals such as a tiger and baby elephant. Temporary exhibitions are held throughout the year.

Another museum in the area is the Helmshore Mills Textile Museum. Housed in two adjacent mills in Helmshore the award-winning museum explores Lancashire’s textile industry with interactive displays and demonstrations of working machinery.

Ski Rossendale in Rawtenstall was forced to close at the beginning of 2011 after Rossendale Borough Council withdrew funding. The dry ski slope has since reopened as a social enterprise and offers skiing and snowboarding for all ages and abilities.

Rawtenstall is also home to Fitzpatrick’s, Britain’s last remaining temperance bar. Situated on Bank Street it was part of chain of temperance bars run by the Fitzpatrick family from Dublin. Visitors can enjoy a glass of Dandelion & Burdock or Sarsaparilla and buy old fashioned sweets, herbs, or natural remedies.

One of the newest and most unusual attractions is the Halo, an eighteen metre diameter steel sculpture at Top o’ Slate above Haslingden. The unique structure is silver in colour during the day, but at night is illuminated by blue, wind-powered LED lighting. It was completed in 2007 and was the fourth and final of a series of Panopticons (structures with a view) across Lancashire commissioned by Mid Pennine Arts. The other Panopticons are The Atom in Pendle, Colourfields in Blackburn, and the Singing Ringing Tree in Burnley.

A good way to visit the Halo is to follow the Shoe Trail from Rawtenstall town centre. Twenty eight massive clay shoes, designed by local children, waymark the 2 mile route. The shoes pay homage to Rossendale’s once famous shoe industry and clay was used as Top o’ Slate was once a clay pit supplying local brick factories.

The Whitworth Water Ski & Recreation Centre offers tuition in both water-skiing and wakeboarding for all ages and abilities and both the able-bodied and the disabled. It is situated at the Cowm Reservoir, just west of Whitworth, and is open every day of the week between April and October. For less adventurous visitors, the reservoir offers a pleasant waterside walk and a picnic area.

Cowm Quarry is a disused stone quarry just north of the reservoir and is one of the best off-road facilities in the country. The 150 acre site offers a variety of routes for trial and pit bikes. On the last Sunday of every month 4×4 owners can bring their own vehicles and experience the thrill of off-road driving.

Rossendale Leisure Trust runs a number of sporting facilities in the area. The Haslingden Sports Centre features a gym, dance and aerobics studio, two squash courts, and a sports hall offering a range of activities such as gymnastics and trampolining.  It’s situated on Helmshore Road in Haslingden. Other facilities include the Haslingden Swimming Pool (East Bank Avenue, Haslingden) and the Marl Pits Swimming Pool (Newchurch Road, Rawtenstall).

Animal Quackers is a children’s farm near Bacup that visitors the opportunity to see and interact with animals such as sheep, cows, goats, and alpacas. Activities offered include lamb feeding, animal petting, and donkey rides.

The A56 runs through Rossendale and is accessed from the M65 motorway (Junction 8 ) to the north and the M66 motorway to the south.

There are no mainline train stations in Rossendale. The East Lancashire Railway runs between Rawtenstall train station and Heywood (via Irwell Vale, Ramsbottom, Summerseat, and Bury). Services operate every weekend throughout the year and also on Wednesdays, Thursdays, and Fridays between April and September. From Bury passengers can take the Metrolink to Manchester city centre and beyond.

Most bus services in the area are provided by Rosso. The main bus station is situated in Rawtenstall town centre. Destinations served include Blackburn, Accrington, Burnley, Rochdale, Bury, and Bolton. For bus times, route maps, and fares visit the Rosso website. 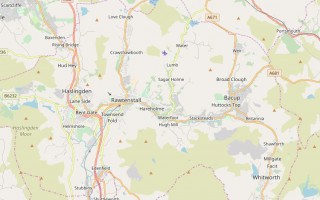