Avenham Park is one of a pair of Victorian-era parks in the centre of Preston, Lancashire. It is bounded by the River Ribble to the south and the city centre to the north. Its sibling, Miller Park, lies immediately to its west.

Both parks were built in the 1860s to provide employment for unemployed cotton workers. They were designed by the renowned English landscape architect Edward Milner.

Avenham Park is the largest of the pair and is sited on a natural bowl. A central open field is often used for events such as Preston’s Easter egg rolling competition.

Around the park there’s a wealth of historical features. The Belvedere, at the eastern end of the park, is a Grade II listed Italianate structure. Until 1875 it stood in Miller Park, on the site now occupied by the statue of the Earl of Derby. It now frequently serves as a wedding venue.

The Old Tram Bridge lies just south of the Belvedere and crosses the River Ribble. The present structure is a 1960s concrete replacement of an earlier wooden bridge.

The Swiss Chalet, at the northern end of the park, provides shelter from inclement weather.  The park’s Boer War Monument lies just to its west.

The Avenham Pavilion is an even more recent addition. It opened in 2008 and houses the park’s offices plus the Pavilion Café. The café is open every day of the week and offers breakfasts, hot and cold sandwiches, jacket potatoes, deserts, ice creams, tea and coffee, and wine and beer. Complimentary wireless internet access is available. The Avenham Pavilion also boasts a larger function room that can host private parties and wedding receptions.

There’s a children’s playground right next to the café. The equipment here is really aimed at toddlers. The Frenchwood Recreation Ground, just east of Avenham Park, offers a larger playground that’s suitable for older children.

The main entrance to Avenham Park is on Ribblesdale Place. This is easily reached from Fishergate, Preston’s main shopping street. The park can also be accessed from Miller Park.

Riverside Walk runs along the southern edge of Avenham Park and Miller Park. It is part of the Preston Guild Wheel, a 21 mile cycling and walking route that circles Preston. Other points of interest on the route include Riversway and Brockholes. 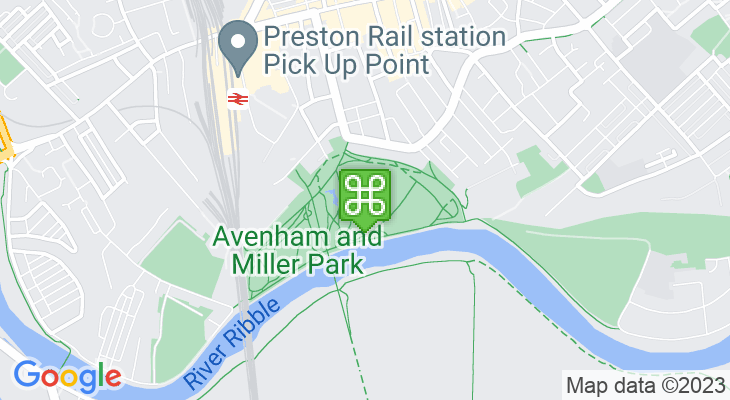 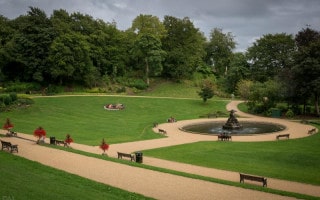