Manchester City FC invites visitors to tour the Etihad Stadium, one the country’s newest and most stunning football grounds.

Participants get the chance to go behind the scenes of the club and experience places they wouldn’t normally see on a match day. Tours, led by a professional guide, include the directors’ box, player’s tunnel, dressing room, press conference room, and dug outs.

Tours operate 3 times a day, 7 days a week. For current tour times visit the official Manchester City FC website. Tickets can be purchased on the day or by calling Manchester City directly. Their telephone number is 0870 062 1894.

The Etihad Stadium is situated in Sportcity, just east of Manchester city centre.

The nearest mainline train station is Manchester Piccadilly. Buses 216, 231, and 237 depart for the stadium from nearby Piccadilly Gardens. Visitors arriving at Manchester Victoria train station can catch bus 217 or 218 from the Shudehill Interchange.

The first stage of the East Manchester Metrolink extension is scheduled to open in summer 2012 and will include a stop at the Etihad Stadium.

Visitors travelling by car and using satellite navigation systems should note that the postcode for the Etihad Stadium is M11 3FF.

The stadium was built for the 2002 Commonwealth Games and was originally called the City of Manchester Stadium. Manchester City moved here from the Maine Road stadium in Moss Side at the start of the 2003/04 Premier League season. It currently has a capacity just short of 48,000.

In summer 2011 the stadium was renamed the Etihad Stadium as part of a 10 year sponsorship deal with Etihad Airways. 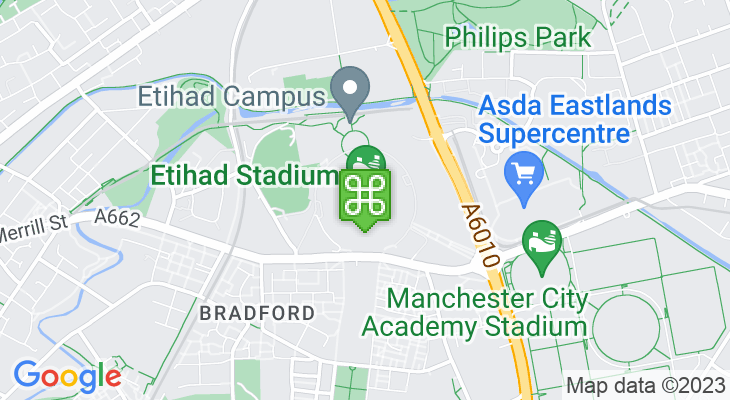