Manchester Airport is the busiest and largest airport in the UK outside London. It offers flights to around 200 destinations and handles around 18 million passengers every year. Facilities include three terminals, two runways, extensive car parking, a transport interchange, and a good selection of hotels.

The IATA code for Manchester Airport is MAN.

There’s a good choice of hotel accommodation in and around Manchester Airport. Options close to the airport’s terminals include the Radisson Blu, Hilton, Crowne Plaza, and Bewley’s Hotel.

The Radisson Blu is a 4-star hotel linked directly to Terminals 1 and 2 by the Skylink covered walkway. Facilities include a restaurant, bars, and health club with indoor swimming pool.

Most of these hotels offer stay, park, and fly options and a shuttle service to the airport.

The Station is a transport interchange located between Terminals 1 and 2, offering train, bus, and coach facilities all under one roof. It’s linked to all three terminals by the Skylink moving walkway.

Direct trains to Manchester Airport include:

For train times and fares to and from Manchester Airport visit National Rail Enquiries.

The Skyline bus (number 43) operates 24 hours a day between Manchester Airport and Piccadilly Gardens in Manchester city centre. It runs every 10 minutes during the day and every 30 minutes throughout the night.

Leave the M56 at Junction 5 for Manchester Airport. From Manchester city centre take the A5103 to the junction with the M56.

Visitors with satellite navigation should note that the postcode to use for Manchester Airport (Terminals 1, 2, & 3) is M90 1QX. Arrivals and departures for all terminals are clearly signposted.

All terminals have free drop off areas. No waiting is allowed and vehicles cannot be left unattended.

Cars picking up passengers need to park in one of the short stay car parks. Parking charges are £2.20 for 30 minutes and £4 for 1 hour.

A range of long stay car parking options is available including Meet & Greet, Shuttle Park, Terminal Multi-Storey, and VIP Valet (with fast lane through security). They can be pre-booked on the official Manchester Airport website. Cheap car parking can be obtained by booking in advance and choosing the furthest car park from the terminals.

Car rental companies operating at Manchester Airport include Avis, Budget, Enterprise, Europcar, Hertz, and Sixt. All have operations at each of the three terminals.

Hackney cabs are available at all 3 terminals. A schedule of fares is displayed at the taxi ranks.

Arrow Cars is Manchester Airport’s official private hire taxi company with booking offices at all 3 terminals. Taxis can be booked online or at the airport. 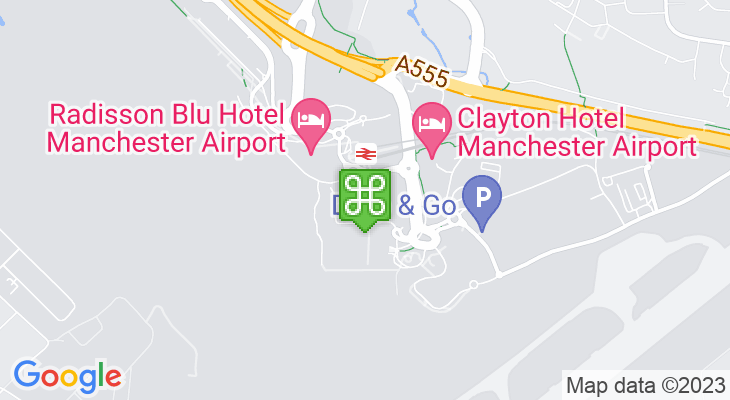