Grange-over-Sands lies on the southern tip of the Cartmel Peninsula in Cumbria, overlooking Morecambe Bay.

The town developed as a resort with the opening of the Furness Railway in the mid-19th century. Wealthy industrialists from the industrial towns of the North West were drawn to the town by its mild weather and built grand houses, many of which are now hotels.

Hotels and places to stay in and around Grange-over-Sands include:

Until the opening of the railway, the major route from Lancaster to Grange was across the treacherous sands of Morecambe Bay. In 1536 the Duchy of Lancaster appointed the first Queen’s Guide to the Sands to escort travellers across the bay. Pre-arranged walks with the present guide are offered in the summer and autumn.

Note: Do not attempt to cross Morecambe Bay without the guide. They are extremely dangerous. Many have perished here including 23 Chinese cockle pickers in 2004.

Grange-over-Sands is overlooked by Hampsfell, a limestone plateau 727 feet high. At its peak is Hampsfell Hospice, a stone tower built in 1846 by the vicar of Cartmel to provide shelter for travellers. On its roof is a large compass pointer identifying visible towns and landmarks such as Lancaster, Morecambe, Barrow, Skiddaw and the Old Man of Coniston.

A well-signposted trail over Hampsfell, passing through Eggerslack Wood and by the Hampsfell Hospice, begins at Windermere Road in the town centre.

The Lakeland Miniature Village at Flookburgh, 3 miles west of Grange-over-Sands, is home to more than 100 miniature buildings handcrafted from local slate. Admission prices are very reasonable.

Holker Hall at Cark-in-Cartmel is Cumbria’s premier country house and the home of Lord and Lady Cavendish. Visitors can wander round the house and view its magnificent library, billiards room, and bedrooms; all of which feature fascinating displays of antique furniture and art.

The house is surrounded by stunning, award-winning gardens. A must see is the Great Holker Lime, a tree dating back to the 17th century and measuring 7.9 metres in girth. Each year the gardens are the venue for the Holker Garden Festival.

Leave the M6 motorway at Junction 36 and follow the A590 west for 9 miles until the Meathop Roundabout. From here take the B5277 to Grange-over-Sands. 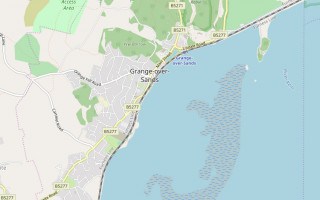