Kirkby Stephen is a small town at the head of the Eden Valley. It surrounded by countryside and approximately 20 miles from both Kendal and Penrith.

The town was granted its market charter in 1361 and a popular market is still held here on Mondays. Look for the ring of cobblestones around the Market Square. Until 1820 they were used to mark the area used for the ‘sport’ of bull-baiting.

Just to the north of Market Square is the Parish Church of Kirkby Stephen. The present structure dates back to the middle of the 13th century, although considerable modifications have taken place since then. The church is home to several historical artefacts, the most notable being the Loki Stone. This large block of stone, decorated with a relief the Norse god Loki, is one of only two such Viking carvings in Europe today.

Kirkby Stephen train station is around 1½ miles south of the town centre, and is on the famous Settle to Carlisle Railway line. The town also lies on Alfred Wainwright’s Coast to Coast Walk. 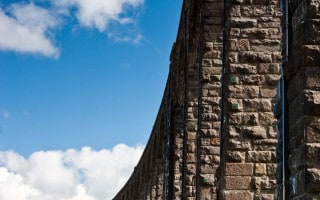 The most spectacular railway in the UK.