Knutsford is a picturesque market town in north Cheshire. It is thought to have been named after the Danish King Canute who camped here while marching to Scotland in 1016. Indeed the name Cunutesford appears in the Domesday Book, a survey of England completed in 1086.

The famous Victorian author Elizabeth Gaskell spent most of her life in Knutsford and the town was the inspiration for her novel Cranford.

Knutsford has a compact centre with narrow streets and cobbled alleys. Many of its buildings were built by Richard Harding Watt, a glove manufacturer from Manchester. Influenced by his travels through Spain and Italy, he settled here and imposed his Mediterranean vision on the town. His works include the Gaskell Memorial Tower (1907) and the Ruskin Reading Rooms (1902), and villas on Legh Road.

The Courtyard Coffee House on King Street houses one of England’s most unusual attractions; the Penny Farthing Museum. Here visitors can peruse a large collection of oversized bicycles while enjoying traditional afternoon tea.

Knutsford’s main draw though is Tatton Park, a magnificent country estate just north of the town. 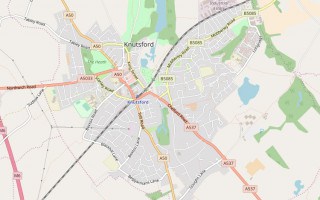