Coniston is a village in the south of the Lake District, between Coniston Water and the Old Man of Coniston. It developed around the copper and slate-mining industries, but began to gain popularity as a tourist destination in Victorian times thanks to the opening of the Furness Railway. Connections with art critic John Ruskin, author Arthur Ransome, and world water speed record breaker Donald Campbell boosted the profile of the village.

The Old Man of Coniston overlooks the village and it was from this mountain, and some of the adjacent fells, that copper was mined and slate quarried. The slopes still bear the scars of industry, but at over 2,600 feet it offers great views of Dow Crag, Coniston Water, Morecambe Bay, and even Winter Hill.

Coniston Water, just east of the village, is 5 miles long and ½ mile wide. The Monk Coniston estate lies to its north and was once owned by Beatrix Potter. The major attraction here is Tarn Hows, one of the most picturesque sights in the Lake District.

Brantwood enjoys a beautiful setting on the eastern shore of the lake and was previously the home of Victorian art critic John Ruskin. It is open to the public and is filled with his watercolours and drawings, and much of his original furniture, books and personal memorabilia. Visitors are also free to explore the 250 acre estate surrounding the house. It boasts a diverse range of environments including eight unique gardens, woodlands, lakeshore meadows, and open fell.

Grizedale Forest occupies much of the land east of Coniston Water and is managed by the Forestry Commission. The popular tourist attraction offers a wide range of facilities including the Go Ape tree top adventure course, a campsite, cycle trails (including one specifically designed for mountain bikes), waymarked walking paths, and a visitor centre with café, shop, children’s playground, and educational centre. However, the forest is perhaps most famous for its contemporary outdoor sculptures. Almost 100 have been commissioned since the programme began in the late 1970s.

Coniston Boating Centre offers a range of different crafts for hire including sailing dinghies, rowing boats, cabin cruisers, canoes and kayaks. Sailing tuition is also available. They are based at the north western end of Coniston Water, at the end of Lake Road and just a short walk from the village.

The Coniston Pier is nearby and is the main departure point for the Steam Yacht Gondola and Coniston Launch.

The Steam Yacht Gondola is an elegant vessel first launched in 1859 but now fully restored by the National Trust. Its regular cruise around the lake takes 45 minutes but passengers can break their journey at Brantwood or Monk Coniston. The walk from Monk Coniston to Tarn Hows is well worth it.

The solar-electric powered Coniston Launch offers two regular services around the lake. The Northern Service is the most frequent and is a circular cruise around the northern half of the lake, calling at the Waterhead Hotel, Torver, and Brantwood.

The Ruskin Museum in the centre of the village offers visitors the chance to explore the lives of John Ruskin, Donald Campbell, and other famous people associated with Coniston. It also contain exhibits about the geology of the area, dry stone walling, copper mining and other local industries.

Hotels and places to stay in and around Coniston include:

To get to Coniston by car from Ambleside simply follow the A593 for 7 miles. The shortest route from Bowness involves crossing Windermere on the ferry and then driving along the B5285 through Hawkshead.

The 505 (Coniston Rambler) runs between Windermere train station and Coniston village. Stops include the Lake District Visitor Centre at Brockhole, Waterhead (for Windermere Lake Cruises), Ambleside, Skelwith Fold, Hawkshead, and the Waterhead Hotel (for Coniston Launch). Another regular bus service is the X12 between Ulverston and Coniston.

Another way to reach Coniston is to take the Cross Lakes Experience. The service operates in the summer and allows visitors can plan their own journey around the Bowness, Hawkshead and Coniston areas using a combination of transport services. For example the journey from Bowness to Coniston would involve taking the Windermere Lake Cruises boat from Bowness to Ferry House, then catching a Mountain Goat minibus to Hawkshead, a Stagecoach bus to Coniston Water, and then the Coniston Launch to Coniston village.

Coniston train station closed to passengers in 1958. The nearest railway station is at Windermere. 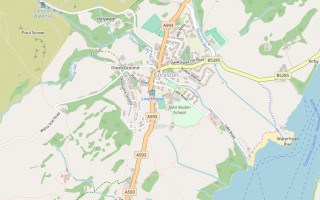