Until the 1830s Crewe was just a small Cheshire village. 1837 marked the beginning of a period of rapid expansion when the Grand Junction Railway company opened Crewe train station and subsequently moved its engineering operations to the area.

Today the town has a population of around 70,000. The train station is one of the largest in North West England and is a major interchange on the West Coast Mainline.

Railway engineering work is still carried out in Crewe, though on a far smaller scale than in Victorian times. The town is now better known as the home of Bentley Motors.

In 1846 the Grand Junction Railway merged with the London and Birmingham Railway and the Manchester and Birmingham Railway to form the London and North Western Railway. 41 years later it gifted Crewe with Queens Park, one of the finest parks in North West England. The park is currently being restored to its Victorian splendour with the help of a grant from the Heritage Lottery Fund.

The Crewe Heritage Centre explores the town’s railway history. It was opened by Queen Elizabeth II in 1987 to commemorate the town’s 150th anniversary.

The Lyceum Theatre offers a programme of shows ranging from music and dance to comedy and theatre. It is owned and operated by Cheshire East Council. Further entertainment options can be found at the Phoenix Leisure Park, home to the Odeon Cinema and the Lakeside Superbowl.

Crewe Alexandra FC is the town’s professional football team. They play their home fixtures at the Alexandra Stadium.

Hotels and places to stay in and around Crewe include:

For independent shopping head to Crewe Market. The main market days are Monday, Friday and Saturday. 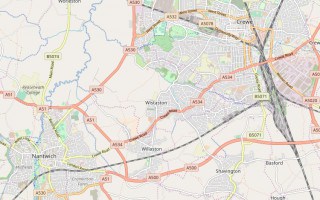