Liverpool Lime Street is the biggest train station in Liverpool and the gateway to the city centre. It is divided into two areas. The main section offers intercity and regional train services while the other is underground and part of the Merseyrail network.

The station opened in 1836 but has been redeveloped several times over the years. It boasts extensive facilities including shops, places to eat and drink, plus long and short-stay car parks.

It is situated on Lime Street in Liverpool city centre, within walking distance of many of the city’s best hotels, restaurants, tourist attractions and shopping districts.

Liverpool Lime Street is on a branch of the West Coast Main Line and offers direct train services to London Euston. Other intercity destinations include Birmingham New Street, Newcastle, Nottingham, and Norwich.

The station is on the Wirral Line of the Merseyrail network. There are direct trains to Chester, Ellesmere Port, Birkenhead, West Kirby, and New Brighton. Passengers can transfer to the Northern Line for destinations such as Southport, Ormskirk, and Kirkby.

The main entrance to the station is on Lime Street. This is a pedestrian entrance. The road is busy and it isn’t possible to drop or pick up passengers here.

The entrance for those being picked up or dropped off is on Skelhorne Street. This is a one-way street accessed from Copperas Hill.

Shops, Places to Eat, and Pubs

Lime Street Station has a good choice of retail outlets where you can buy books and newspapers, snacks drinks, and other essentials for your train journey. Most are located on the main concourse near the Lime Street entrance and platforms 1 to 6. They include Boots, WHSmith, M&S Simply Food, Costa, Upper Crust (baguettes and sandwiches), and Burger King.

The station also boasts two pubs. The White Star, formerly Coopers, is the smallest of the pair and is on the main concourse above Burger King.

The Head of Steam is a large venue with multiple bars and a pool hall. It occupies part of the building that was formerly the North Western Hotel, built in the 19th century as a railway hotel. The rest of the building is a student hall of residence. The Head of Steam can be accessed Lime Street (opposite St George’s Hall), Nelson Street (opposite the Empire Theatre), or from the northern end of the station concourse.

Look carefully for the life-size bronze statues of comedian Ken Dodd and Labour MP Bessie Braddock. Chance Meeting by sculptor Tom Murphy depicts the Liverpool icons meeting at the station. It’s close to the main entrance on Lime Street and platforms 7 and 8.

On the southern side of the station on Skelhorne Street there’s a covered area with a taxi rank, drop-off zone, and a small short-term car park. The station concourse and platforms are right next to it so there’s not far to walk to get to the trains. There’s almost always a queue of black cabs waiting to whisk you to your final destination. At the time of writing (December 2014) parking in the short-term car park is free for the first 20 minutes. After that, charges apply.

The official postcode for Liverpool Lime Street is L1 1JD. This is the postcode of the main station building.

To reach the long-stay car park on Lord Nelson Street using a satellite navigation system, use the postcode L3 5QB. 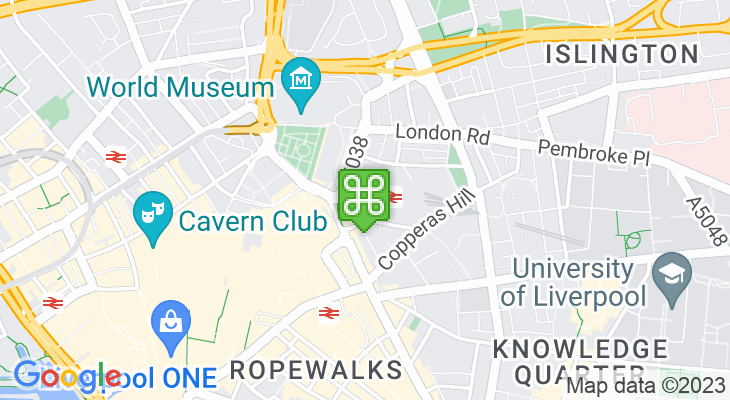