Barrow-in-Furness, more commonly known as Barrow, is an industrial port and town on the Furness Peninsula in Cumbria, the north-western edge of Morecambe Bay.

The town was a sleepy fishing village until the middle of the nineteenth century when rich iron ore deposits were discovered in the area. By the late 19th it was home to the largest steelworks in the world and a major centre for shipbuilding in the UK.

Other towns and villages in the Furness area include Ulverston, Dalton-in-Furness, Grange-over-Sands, and Cartmel.

Hotels and places to stay in and around Barrow include:

Barrow’s history is explored at the Dock Museum, an impressive glass and steel structure built over a Victorian graving dock. It features a magnificent display of model ships plus a social history gallery telling the story of Barrow’s rapid expansion.

Furness Abbey lies on the outskirts of the town and was once one of the richest Cistercian monasteries in England. Other historic buildings in the area include Dalton Castle and Piel Castle.

The Forum is a mid-sized theatre and arts venue opposite Barrow’s magnificent Victorian Town Hall. It offers a regular programme of music, comedy, and dance events.

Kids will enjoy a trip to the South Lakes Wild Animal Park. Close to Dalton-in-Furness it is one of the UK’s leading conservation zoos.

Barrow’s only cinema, the Vue, is located at Hollywood Park. Other attractions include Cumbria Karting, an indoor go kart track, and Barrow Golf Club.

Barrow AFC, the town’s football club, plays their home fixtures at the Holker Street stadium. The rugby league team, Barrow Raiders, are based at Craven Park.

Barrow is the most popular shopping area on the Furness Peninsula. Portland Walk is a large open air shopping centre anchored by a large Debenhams department store.

Over 80 independent traders ply their wares at Barrow Indoor Market, one of the largest in Cumbria. Stalls offer regional produce such as Morecambe Bay potted shrimps, Cumberland sausages, and Kendal mint cake. Market days are Mondays, Wednesdays, Fridays, and Saturdays.

Leave the M6 motorway at Junction 36 and follow the A590 to Barrow.

Visitors coming from the Lake District should follow the A592 from Ullswater/Windermere until it joins with the A590 to Barrow.

Barrow has a good selection of pay-and-display car parks. The largest are at Portland Walk and Market Street. A full list of car parks, together with applicable charges, is available on the Barrow Borough Council website. 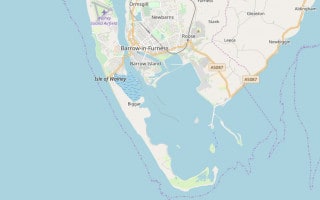