Rochdale is a large market town in Greater Manchester. It lies in the valley formed by the River Roch, surrounded to the north and east by the Pennines.

The town dates back to medieval times but expanded rapidly as a mill town during the Industrial Revolution.

The Metropolitan Borough of Rochdale includes Rochdale itself plus outlying towns of Heywood, Littleborough, Middleton, and Milnrow.

Hotels and places to stay in and around Rochdale include:

Visitors requiring more accommodation options should consider staying Bury or Oldham. Both towns are just a short drive from Rochdale.

Rochdale is best known as the birthplace of the Co-operative Movement. In 1844 the Rochdale Society of Equitable Pioneers, a group of 28 weavers and artisans, founded the first Co-operative shop in Rochdale with just £28 of capital. Today the UK Co-operative Group alone boasts over 5 million members, around 5000 stores, and over 120,000 employees. The remarkable history of the movement is told at the Rochdale Pioneers Museum, housed in the original shop on Toad Lane.

Touchstones is an award-winning arts and heritage centre in the town centre. It was built in 1884 as a public library but now houses a museum, four art galleries, a local studies centre, café, and shop.

The Greater Manchester Fire Service Museum houses a unique collection of full-size historical fire engines, uniforms, medals and related memorabilia. It’s situated on Maclure Road, near the Rochdale train station, and is open every Friday and on the first Sunday of the month. Admission to the museum is free.

Heywood, a small town just west of Rochdale, is home to the southern terminus of the East Lancashire Railway, a popular heritage railway offering a great family day out. The other stations on the line are Bury, Summerseat, Ramsbottom, Irwell Vale, and Rawtenstall.

For a day in the countryside, visit Hollingworth Lake Country Park or Healey Dell Nature Reserve.

The only cinema in Rochdale is the Odeon at Sandbrook Park, a retail and leisure development just south of the town centre. The town’s tenpin bowling alley is also here. Concerts, comedy shows, pantomimes, and other live events can be seen at the Gracie Fields Theatre.

Rochdale is easily reached by car. Simply leave the M62 at Junction 20 and follow the signs to Rochdale town centre.

For train fares and times to and from Rochdale visit the National Rail Enquiries website.

Construction work on the Metrolink extension to Oldham and Rochdale Line is already underway. Rochdale train station is expected to become a Metrolink station in summer 2012. The extension into Rochdale town centre is scheduled for completion in 2014.

National Express runs several daily coach services to and from Rochdale. The service from London to Rochdale runs twice a day and calls at Milton Keynes, Manchester, and Oldham. The coach from London to Bury also calls at Rochdale. Travellers can also catch any coach to Manchester and then get a bus or train Rochdale. 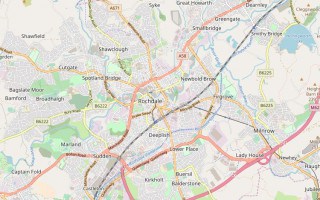