Wythenshawe Park is a large public park in Wythenshawe, Manchester. It boasts a wealth of facilities, large open spaces suitable for picnics, and several areas of woodland.

The park offers a decent children’s playground with a selection of slides, swings, climbing frames, and other play equipment.

On busy days there’s usually an ice cream van near the entrance.

Wythenshawe Hall lies at the centre of the park. The timber-framed house was built in the 16th century and was the home of the Tatton family for around six centuries.

The house was besieged by the Parliamentarians during the English Civil War (1642 – 1651). The owner, Royalist Robert Tatton, defended it for three months before surrendering. He repurchased the house after paying a fine.

In 1926 Robert Grenville Tatton sold the property to Lord and Lady Simon. They donated it to the people of Manchester. It was open to the public as a museum until council budget cuts in 2010 forced its closure.

In 2016 the building was severely damaged by arson. A restoration project was due to be completed in 2019. At the time of our last visit (August 2020), the hall was fenced off.

There’s a statue of Oliver Cromwell just outside the hall. It was erected in 1875 near Manchester Cathedral in Manchester city centre. It was moved to the park after Deansgate was redesigned in the late 1960s.

Tennis courts at Wythenshawe Park are popular with the local community. The pavilion is derelict but the courts are in fairly good condition. They can be booked online via the LTA Website. There are no fees.

Other sports facilities include football pitches and an athletics track.

The bowling greens here were not in use at the time of our last visit (August 2020).

Wythenshawe Community Farm is a working farm in the park. It offers youngsters the chance to learn about farming and how food is produced. Farm animals include goats, chickens, cows, sheep, and pigs. Entry is free.

The farm shop sells fresh eggs, meat, and other produce.

This facility is run by local gardening enthusiasts. Greenhouses offer fish ponds, plus displays of cacti, succulents, and other plants.

Facilities at the park include a cafe and toilets.

The main entrance for cars is on Wythenshawe Road. Use the postcode M23 0AB to find it using a satellite navigation system. Ample car parking is available, including disabled spaces. The car park is located at the centre of the park, close to the children’s playground.

There’s also a pedestrian entrance on Wythenshawe Road, next to the North Lodge.

Metrolink stations near Wythenshawe Park include: 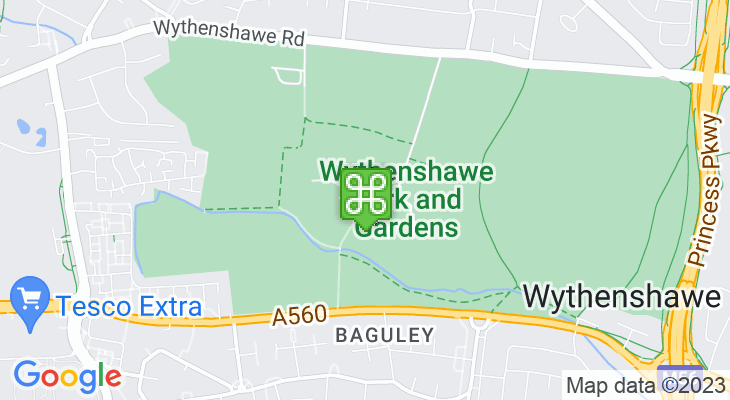 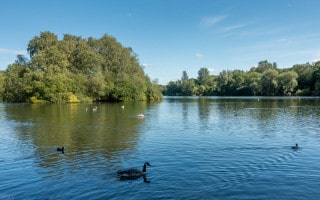 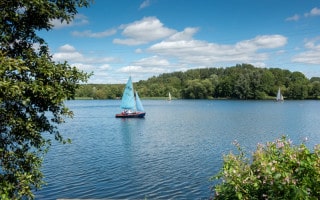 Park and recreational area in Sale known for its water-based activities.