Pennington Flash is a country park in Leigh. At its centre is a large lake (the ‘Flash’) created as a result of mining subsidence. It has a reputation for being one of the best birdwatching sites in North West England.

One of the best ways to appreciate the park is to walk around the lake. As well as the birds, there are lots of interesting things to see on this walk. It’s a fairly easy walk along established paths and no steep inclines.

Once at the lake we immediately encountered a large number of ducks, swans and other birds on the shoreline.

Heading further into the park we came to a couple of playgrounds. The first is quite small with just a few swings, but around the corner is a larger one with swings, roundabouts, and climbing frames.

After the playground there are several possible paths that can be taken to begin the circuit of the lake. We took the one that went in a north-westerly direction. This takes a route passing ponds such as Pengy’s Pond, Kidney Pond, and Fox Scrape. On the way there are numerous bird hides where you can look out over the water and observe the birds.

The path we were following then met up with the Leeds and Liverpool Canal. We followed a canal-side path for around 1/3 mile before coming across some rather interesting public works of art. Both are by Leyland-based sculptor Thompson Dagnall.

Unlock is a large book made from lock gates. According to the sculptor’s website it represents a ‘book holding the secrets and stories of the canals’. Nearby is Greenheart-Northern Soul; two benches referring to the name of the project to transform the landscape of the Metropolitan Borough of Wigan and the music made famous at Wigan Casino.

After admiring the sculptures for a while we made our way back down to the northern shore of Pennington Flash, passing a body of water on our left known as The Lagoon.

On reaching the Flash we headed west, following a path along the shore. It had been raining the previous evening and this path was a little muddy and uneven. The walk as a whole is pretty easy and could be done by any able-bodied person. This section would, however, be tricky for anybody with a pushchair.

After about ½ mile the path joins the delightfully named Slag Lane. We turned left here and walked along the road for around 100 yards before taking a small track that led back into the park.

The path then leads south to Mossley Hall Farm where we crossed a stile to reach the farm’s driveway. We headed up the drive to Byrom Lane and then headed east. Byrom Lane became Sandy Lane and shortly after it did we turned left down Green Lane and headed towards Sorrowcow Farm.

A dirt track then took us through an area of woodland that took us to the southern shore of the Flash.

Then we followed a path along the shoreline that took us back to our car. 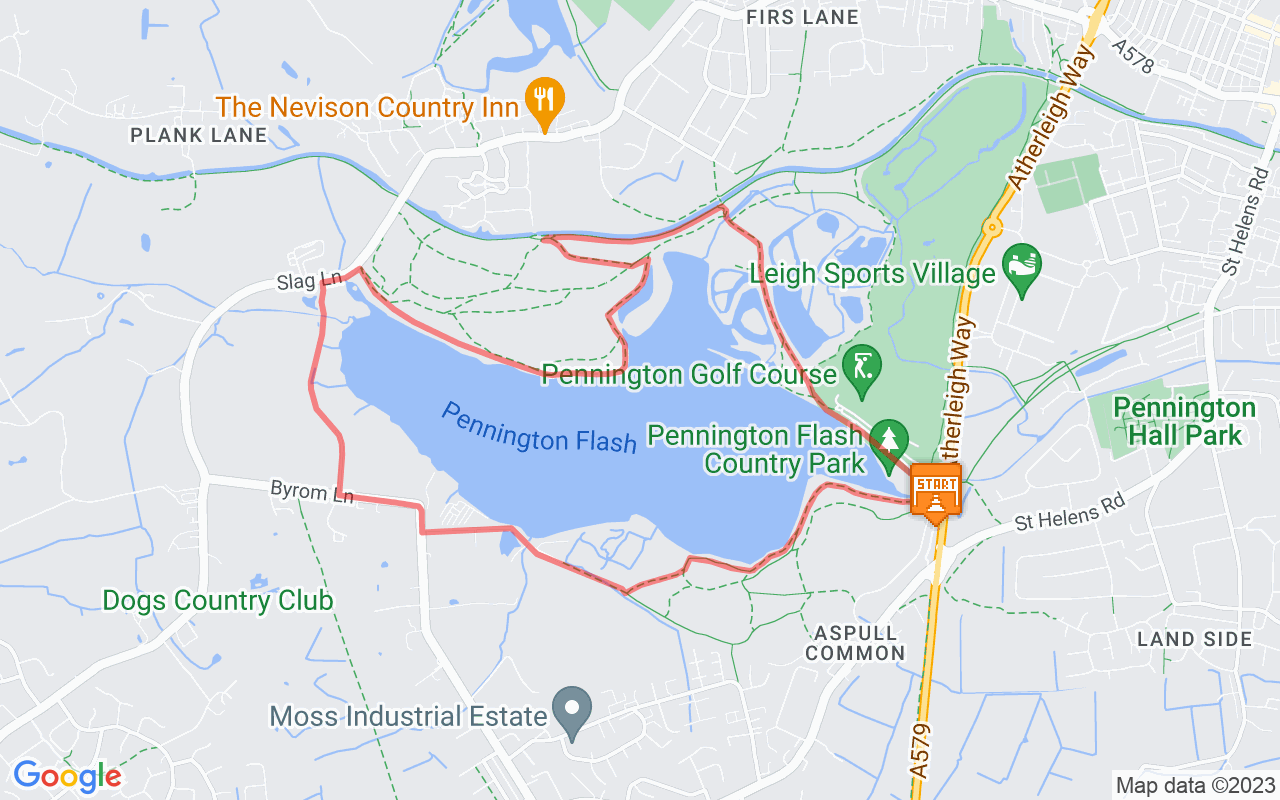