Keswick is a busy town in the Northern Lake District. In the 16th century the discovery of graphite in the area established the town as an important centre for manufacturing pencils. Today its economy is almost entirely devoted to tourism.

Derwent Water lies just south of town and is the third biggest lake in the Lake District. Bassenthwaite Lake, just three miles north, occupies fourth position. Buttermere, Crummock Water, and Loweswater lie closely together to the west in the Vale of Lorton. Thirlmere, to the east, is a reservoir created to supply Manchester with water.

Many consider Derwent Water one of the prettiest lakes in the Lake District. The easiest way to experience the spectacular scenery is to take a 50-minute cruise around the lake with Keswick Launch. The main landing stage is at the bottom of Lake Road in Keswick but the boats calls at six more stops where passengers are free to hop off and on and explore the area.

Walkers reaching the summit of Catbells are rewarded with a magnificent view of Derwent Water. Many start the trip from Hawes End, one of the stops served by the Keswick Launch. Latrigg is one of the lowest fells in the Lake District but offers great panoramas of Derwent Water and Bassenthwaite Lake. It is easily reached from Keswick but the car park at the end of Gale Road offers even quicker access. Skiddaw can also be climbed from here.

Visitors wishing to get onto the water themselves can hire motor boats, canoes, and kayaks from various operators around the lake. Options include the Keswick Launch, Derwent Water Marina, Platty Plus, and Nichol End Marine.

The Theatre by the Lake enjoys a beautiful setting close to Derwent Water. The repertory theatre produces up to nine plays a year, and also hosts concerts, films, and many of Keswick’s major festivals and events. Visitors can watch the latest movies at the town’s Alhambra Cinema.

The Keswick Museum is a traditional Victorian museum with an eclectic collection of exhibits. Amongst the odd collection of curios on display is a 600 year old cat, a giant xylophone made with slate from Skiddaw, a penny farthing bicycle, and the writing desk of the Poet Laureate Robert Southey. It’s situated in Fitz Park, a grassy municipal park at the northern end of the town with a fantastic children’s playground, tennis courts, bowling green, putting green, and riverside walks.

Hope Park is the other major park in Keswick. Situated on the way to Derwent Water it features ornamental gardens, plenty of seating, a pitch and putt golf course, putting course, and crazy obstacle golf course.

After the discovery of graphite in the Borrowdale in the 16th century, Keswick became an important centre for pencil manufacturing. The Pencil Museum tells the story of how pencils are made and is also home to the world’s longest coloured pencil. It also offers a children’s art studio, demonstrations and drawing workshops.

Castlerigg Stone Circle is the most visited stone circle in Cumbria one of the earliest and most impressive in Britain. It stands on a remote plateau, with a fantastic 360 degree view of the surrounding fells.

Bassenthwaite Lake is the only actual lake in the Lake District; the others are meres or waters. In 2001 the first wild ospreys to breed in the Lake District for more than 150 years set up home here and have returned every year since. There are two official viewpoints, both in Dodd Wood, and the birds normally arrive in March or April and leave in August or September.

Trotters World of Animals, at the head of Bassenthwaite Lake, is a zoo with over 100 species. Handling of the animals is actively encouraged and there are also feeding programmes, birds of prey displays, a children’s play area, and a café.

Further details about all these attractions and events can be obtained from the Keswick Tourist Information Centre. It’s situated in the Moot Hall on the Market Square. It also offers an accommodation booking service, maps and walking guides, gifts, souvenirs, and more.

Hotels and places to stay in and around Keswick include:

Castlerigg Farm is a camping and caravan site situated at the foot of Walla Crag, roughly one mile east of Keswick town centre. The family-run site caters to family and couples and operates strict no noise policy after 10.30 pm. Facilities include a café, shop, laundry room, dishwashing room, showers and washrooms, hook-up points for caravans and motorhomes,

Castlerigg Hall is just across the road and enjoys fabulous views of Derwent Water. It accepts touring caravans, motorhomes, and tents but also rents out holiday caravans and camping pods. The site boasts extensive facilities including a large playing field, laundry, showers, a kitchen for campers, and a restaurant serving traditional Cumbrian breakfasts and evening meals. A well-stocked shop offers meat, fresh vegetables and bread, milk, beer and wine, toiletries, and newspapers.

Other camping and caravan sites around Keswick include Herdwick Croft near Bassenthwaite Lake, and Burns Farm in St John’s in the Vale.

Keswick is easily reached from the M6. Simply leave the motorway at Junction 40 (Penrith) and take the A66 west for 16 miles.

Another large car park is the Lakeside Car Park on Lake Road (CA12 5DJ). It offers 253 parking spaces and is convenient for visitors to the Theatre by the Lake and Keswick Launch.

Bus service 73/73A (The Caldbeck Rambler) from Keswick calls at Castlerigg Stone Circle, Mungrisdale, Mosedale, Hesket Newmarket, Caldbeck, Ireby, Uldale, the Castle Inn, Bassenthwaite village, Mirehouse, and Applethwaite (Skiddaw). It runs every Saturday throughout the year and every day in the summer months.

Bus service 77/77A (The Honister Rambler) from Keswick stops at Portinscale, Catbells, Grange Bridge, Seatoller, Honister Slate Mine, Buttermere, Lorton, and Whinlatter. The service operates every day throughout the summer.

Service 78 (The Borrowdale Rambler) from Keswick to Seatoller calls at the Lodore Hotel, Grange Bridge, and Rosthwaite.

On Saturdays in the summer the X8 bus service from Chorley in Lancashire to Keswick, stops at Preston, Windermere train station, Ambleside, and Grasmere. 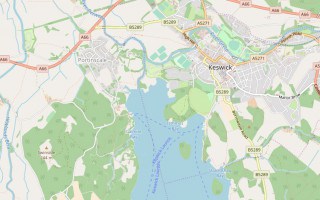