Chorley is a town and borough in Lancashire, North West England.

The population of the borough grew rapidly in the 19th century. In 1801 its population was around 20,000. By 1911 it had almost reached 69,000. Like many areas of Lancashire, it owed much of its growth during this time to the textile industry. It was also an important coal mining area. Chisnall Hall Colliery in Coppull was one of the biggest coal mines in Lancashire.

Chorley’s population stagnated throughout the first half of the 20th century. The pace of growth increased again from the 1970s onwards.

Chorley played an important role during the Second World War when it was home to the Royal Ordnance Factory Chorley, a large munitions manufacturer. At the height of production, almost 30,000 people worked here. The factory closed in 2007. The land is now Buckshaw Village, one of the largest brownfield housing developments in North West England.

Chorley has a lower ethnic minority population than both the regional and national average.

Chorley Council is the local authority responsible for the administration of the borough. They are based in Chorley town centre.

According to data from the UK's Office for National Statistics (ONS), the current population of Chorley is 118,900.

The table below shows population statistics for Chorley between 2011 and 2020 split by age group.

This represents a population growth rate of 10.50%.

In 2020, 21,900 children lived there, which was 18.42% of the total population. The percentage of children living in Chorley in recent years has been rising.

In 2020, 73,200 adults lived there, representing 61.56% of the total population. The percentage of adults living in Chorley in recent years has been declining.

There are currently more females than males in Chorley.

Population statistics by gender for Chorley between 2011 and 2020 are shown in the table below.

In the UK, there is a census every 10 years.

Census statistics help paint a picture of the United Kingdom. Data from the census is used to help authorities plan and run public services, develop policies, and allocate funding.

The results from the 2021 Census for England, Wales, and Northern Ireland will be released in summer 2022.

The census prior to this was held in 2011. Demographic data for Chorley is included below.

As of today, the most recent published UK Census data was for 2011. Results of the 2011 United Kingdom Census showed that the total population of Chorley was 107,155.

Chorley covers an area of 20,280 hectares. The population density was 5.28 persons per hectare.

Chorley has a higher percentage white population than the average for England (85.42%).

Asians were the second-largest ethnic group in Chorley. 1,710 (1.60%) of the population identified as Asian.

Chorley has a lower percentage Asian population than the average for England (7.82%).

Chorley has a higher percentage Christian population than the average for England (59.38%).

Muslims were the second-largest religious group in Chorley. 1,130 (1.05%) of the population identified as Muslim.

Chorley has a lower percentage Muslim population than the average for England (5.02%).

Chorley is a town and borough in central Lancashire. The town itself lies between Preston and Bolton.

The borough is bordered by South Ribble, Blackburn with Darwen, Bolton, Wigan, and West Lancashire.

Chorley enjoys excellent connections to the national motorway network. The M6, M61, and M65 motorways all pass through the borough.

Chorley is located in the town centre and is the busiest station. 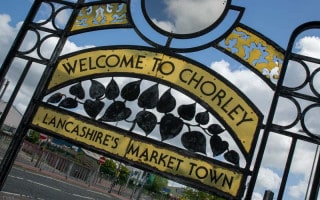 Guide to Chorley in Lancashire. Includes shops and markets, things to do, and places to visit.