The Wirral is a peninsula in North West England nestled between the River Mersey and River Dee.

The major settlements of Birkenhead and Wallasey lie on its eastern side facing Liverpool. The rest of the Wirral is predominantly rural.

Shipbuilding and maritime transport played an important role in the development of the region, though in recent years these industries have declined and many residents are now commuters working in Liverpool.

The area looks set to be revitalised thanks to a company from Manchester. In 2006 the Peel Group announced the Wirral Waters development, a £4.5 billion project that would see the transformation of Birkenhead’s derelict docks to a waterfront to rival that of New York or Sydney.

Planning permission was granted in 2010 but the scheme is likely to take decades to complete. Until then Birkenhead and the Wirral still offer visitors plenty of attractions and things to do, hotels, and more.

Hotels and places to stay in and around the Wirral include:

Port Sunlight is a picturesque model village created at the end of the 19th century by William Hesketh Lever for workers at his Lever Brothers soap factory. It is an important conservation area and contains over 900 Grade II listed buildings. The history of the village, its community, and founder can be explored at the Port Sunlight Museum.

Nearby is the Lady Lever Art Gallery, part of National Museums Liverpool. It houses the vast personal art collection of Lever including many famous pre-Raphaelite paintings and an impressive collection of Wedgwood Jasperware.

One of the best ways to explore the Wirral is to take a trip on one of the Mersey Ferries. River Explorer Cruises run hourly between Pier Head in Liverpool and the Seacombe and Woodside ferry terminals on the Wirral. Stop off at Seacombe to visit Spaceport, or at Woodside for the U-boat Story.

Grange and Pyramids Shopping Centre in Birkenhead town centre offers over 160 shops. The Cherry Tree Centre in Wallasey is a smaller development with around 40 stores. For a good selection of craft and speciality shops visit Brimstage Hall.

The Croft Retail and Leisure Park offers a good selection of stores plus a cinema, bowling alley, and several restaurants. Other retail parks in the Wirral include the Rock Retail Park in Birkenhead and the Tebay Retail Park in Bromborough.

The Merseyrail local rail network connects with the national rail network at Liverpool Lime Street train station and offers a quick and regular service throughout the Wirral.

The M53 motorway runs through the centre of the Wirral and offers rapid access to all areas. It starts at Chester and ends at Wallasey, and can be accessed from the M56.

Mersey Ferries operate a ferry services between Liverpool and Seacombe/Woodside. 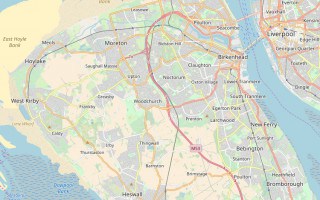 Interactive map of the Wirral.