Bowness is a busy tourist town on the eastern shore of Windermere, roughly halfway between Ambleside and Waterhead to the north, and Lakeside and Newby Bridge to the south.

There has been a village here since the 15th century but the area really developed with the opening of the train station at Windermere in 1847. Today the town is the most popular tourist destination in the Lake District.

At the World of Beatrix Potter all 23 of the author’s tales are brought to life through a series of three dimensional displays. The popular attraction shares a building on Crag Brow in Bowness town centre with the Old Laundry Theatre, one of only a handful of in-the-round theatres in England.

The Lake District Visitor Centre at Brockhole is the main visitor centre of the Lake District National Park Authority and is housed in a Victorian mansion on the shores of Windermere, two miles north of Bowness. It offers a wide range of activities and attractions for both adults and children including an adventure playground, crazy golf course, indoor play area, climbing wall, café, gift shop, plus kayaking and sailing lessons. The extensive gardens were designed by Victorian landscape architect Thomas Mawson and offer fantastic views over the lake.

Blackwell lies in an elevated position above the lake, 1½ miles south of Bowness, and is one of the finest buildings to emerge from the Arts and Crafts movement. It was built at the turn of the century by Mackay Hugh Baillie Scott as a holiday home for Sir Edward Holt, owner of Holt’s Brewery in Manchester. It is now managed by the Lakeland Arts Trust and open to the public.

Despite all these attractions, the most popular thing to do in Bowness is to take a boat trip on the lake. Windermere Lake Cruises carry over 1.3 million passengers every year, making them the busiest tourist attraction in the Lake District and one of the top 10 paid attractions in England.

From Bowness passengers can cruise north to Ambleside (Waterhead) or south to Lakeside. Attractions in Ambleside include Bridge House, Stock Ghyll Force and the Armitt while Lakeside is home to the Lakes Aquarium and the Lakeside and Haverthwaite Railway.

The most popular walk from Bowness is the short climb to Brant Fell. The route starts on Brantfell Road in the town centre and takes around one hour there and back. At the summit visitors are rewarded with views of the Windermere, Crinkle Crags, and the Langdale Pikes.

Hotels and places to stay in and around Bowness include:

The Windermere Ferry departs from Ferry Nab, just south of Bowness, and offers a quick way to cross the lake to reach Hawkshead and Grizedale Forest. 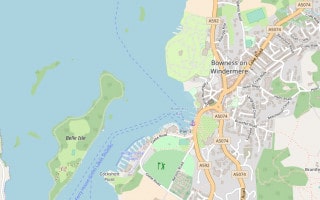