Preston is a city and non-metropolitan district in North West England. It is the most populous settlement in Lancashire and its administrative centre. It was granted city status in 2002.

In Victorian times, Preston was a major center for textile production.

The textile industry entered a terminal decline in the 20th century and population growth slowed. The current population of Preston is 147,600.

Asian immigrants came to Preston after the Second World War. Today, it is a diverse city. The percentage of whites is lower than the average for England. The proportion of Asians is higher than the English average.

The University of Central Lancashire (UCLan) is a global university, recognised for its teaching quality and innovation. The main campus is in Preston but it also has bases in Burnley, Cumbria, and Cyprus. More than 25,000 students attend the university.

According to data from the UK's Office for National Statistics (ONS), the current population of Preston is 147,600.

The table below details population statistics for Preston over the past few years, split by age group.

This represents a population growth rate of 5.05%.

In 2021, 29,200 children lived there, which was 19.78% of the total population. The percentage of children living in Preston in recent years has been rising.

In 2021, 96,400 adults lived there, representing 65.31% of the total population. The percentage of adults living in Preston in recent years has been declining.

There are currently more females than males in Preston.

Population statistics by gender for Preston between 2012 and 2021 are shown in the table below.

The census is a snapshot of the UK that includes important data on population figures and social changes.

Statistics from the 2021 Census (for England, Wales, and Northern Ireland) will be reported in summer 2022.

The 2011 census was prior to this. Demographic information for Preston is shown below.

As of today, the most recent published UK Census data was for 2011. Results of the 2011 United Kingdom Census showed that the total population of Preston was 140,202.

Preston covers an area of 14,229 hectares. The population density was 9.85 persons per hectare.

Preston has a lower percentage white population than the average for England (85.42%).

Asians were the second-largest ethnic group in Preston. 21,732 (15.50%) of the population identified as Asian.

Preston has a higher percentage Asian population than the average for England (7.82%).

Preston has a higher percentage Christian population than the average for England (59.38%).

Muslims were the second-largest religious group in Preston. 15,769 (11.25%) of the population identified as Muslim.

Preston has a higher percentage Muslim population than the average for England (5.02%).

Preston is located in the county of Lancashire in North West England. It is bordered by Wyre, the Ribble Valley, South Ribble, and Fylde.

The city lies on the route of the M6, the motorway linking Rugby in the West Midlands to Gretna in Scotland. Other cities and towns on the M6 include Birmingham, Crewe, Warrington, Wigan, Lancaster, and Carlisle.

The M55 connects Preston to Blackpool, while the M65 offers quick access to Blackburn, Burnley, and Colne.

The M61 links Preston to Bolton and the M60 (Manchester Ring Motorway).

Preston Bus Station is a vital transport hub, offering bus services to destinations all over Lancashire. It is an excellent example of Brutalist architecture. The station has been praised for its geometric design and dramatic use of concrete. 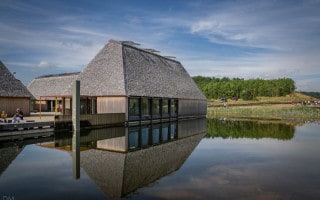 Guide to Preston. Includes shops and markets, things to do, and places to visit.