The Merseyside Maritime Museum at Albert Dock explores Liverpool’s rich maritime history and is one of the country’s most popular tourist attractions.

The Seized! gallery is the official national museum of the UK Border Agency. Situated in the basement of the building it examines topics such as smuggling, taxes, and counterfeit products. Exhibits include steel girders used to smuggle cigarettes into the UK and fighting knives intercepted at Manchester Airport.

The Titanic, Lusitania, and the Forgotten Empress gallery explores the history of three ships that met with tragic ends. It includes fascinating objects recovered from the wreck of the Titanic such as a passenger’s watch, crockery, and a ventilation grill. The gallery also houses a scale model of the ship and a survivor’s lifejacket.

The Art and the Sea gallery boasts a huge collection of model ships and maritime paintings while the Emigration gallery tells the story of the millions of emigrants that have sailed from Liverpool in search of a better life.

The third floor of the building is home to the International Slavery Museum.

The museum is open 7 days a week, every day of the year except Christmas Day, Boxing Day, and New Year’s Day. Opening hours are 10 am to 5 pm. Entry to the museum and all exhibitions is free.

The Maritime Dining Rooms on the fourth floor offers fantastic views of the Albert Dock and has featured in the prestigious Michelin Guide while the Quayside café on the ground floor offers snacks, hot and cold drinks, and free wireless internet access.

Other facilities at the Merseyside Maritime Museum include a children’s play area, information desk, baby changing area, and a shop selling gifts, books, and postcards.

The museum is situated at the northern end of Albert Dock. The closest mainline railway station is Liverpool Lime Street, approximately ¾ mile from Albert Dock. Visitors preferring not to walk can take the Merseyrail train to James Street, ¼ mile from the museum, or take a CityLink bus directly to Albert Dock.

Albert Dock is well signposted from the M62 motorway. There is limited pay-and-display car parking at the dock itself. More car parking is available at the Echo Arena and Liverpool One.

Tourist attractions and things to do near Merseyside Maritime Museum include:

Cinemas near Merseyside Maritime Museum include:

Places to shop near Merseyside Maritime Museum include:

Hotels near Merseyside Maritime Museum include: 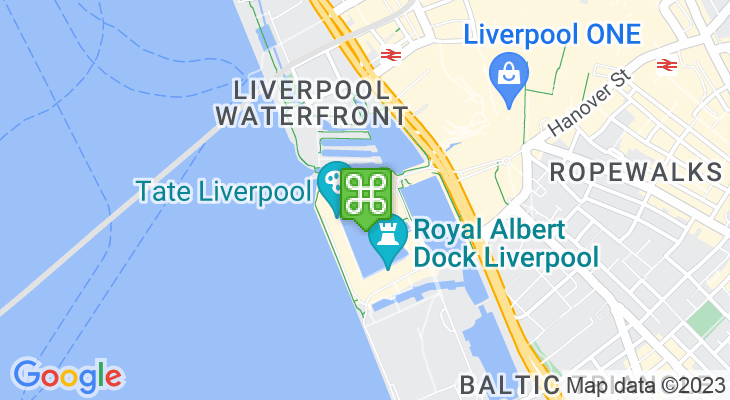