Liverpool’s Albert Dock opened in 1846 as a combined dock and warehouse system. It was designed to accommodate sailing ships, but the advent of powered vessels heralded its decline and eventual closure in 1972.

Redevelopment of the dock began in the early 1980s when the Merseyside Development Corporation was established. Today its Grade I listed buildings, the largest collection in the UK, house a great selection of museums, tourist attractions, hotels, bars, and restaurants.

Tate Liverpool is one of the largest galleries of contemporary and modern art outside London while the Beatles Story explores the life of the city’s most famous sons and the impact they had on music and culture.

The Yellow Duckmarine is a converted WWII amphibious landing vehicle that has been converted to offer tours of Liverpool city centre and the docks. The hour long tour, half on land and half in water, takes in some of the city’s major landmarks such as Pier Head and The Three Graces, St George’s Hall, the Metropolitan Cathedral, Philharmonic Hall, Liverpool Anglican Cathedral, Salthouse Dock, and Albert Dock.

Information about all these attractions and more can be obtained from the Albert Dock Visitor Centre. It’s situated in Anchor Courtyard, near Circo and the Premier Inn.

The hotels on the Albert Dock itself are the Premier Inn and the Holiday Inn Express. Both are situated in the Britannia Pavilion on the southern side of the dock (close to the Echo Arena) and offer reasonably cheap rates.

The 3-star Jurys Inn and the 4-star Staybridge Suites are both located on the Kings Waterfront next to the Echo Arena and within easy walking distance of the Albert Dock.

The Albert Dock offers some of Liverpool’s most stylish restaurants and bars, most of which are situated on the southern and eastern side of the dock. Choices include Gusto, PanAm, What’s Cooking, Circo, Revolution, Spice Lounge, and the Pump House pub.

Albert Dock is well signposted from the M62 motorway. There is limited pay-and-display car parking at the dock itself. Additional parking is available at Liverpool One and the Arena and Convention Centre Liverpool.

Tourist attractions and things to do near Albert Dock include:

Cinemas near Albert Dock include:

Places to shop near Albert Dock include:

Hotels near Albert Dock include:

Train stations near Albert Dock include: 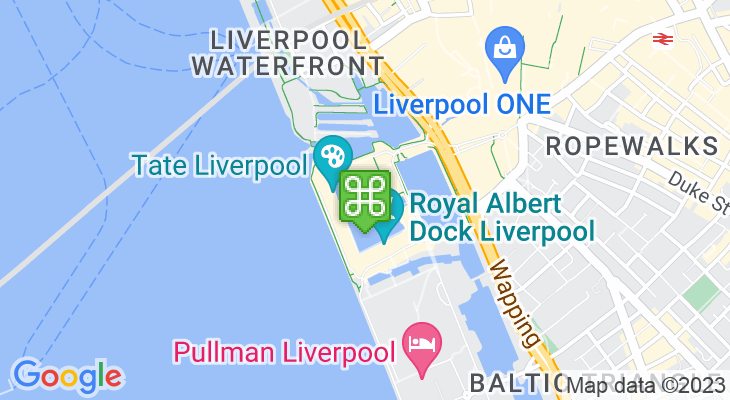