Stockport is a town located 6 miles southeast of Manchester. It is the largest town in the Metropolitan Borough of Stockport, an area that also includes Cheadle Hulme, Marple, Bredbury, Reddish and Romiley.

The population of the metropolitan borough is 294,200

Although once described by 19th century philosopher Engels as ‘one of the darkest and smokiest holes in the whole industrial area’, the Stockport of today boasts over 30 parks, one million trees and is 45% green space.

Hotels and places to stay in and around Stockport include:

One of Stockport’s most fascinating attractions is the Stockport Air Raid Shelters. During WWII these civilian underground air raid shelters were built into sandstone cliffs in the town centre and have been recently restored and opened to the public.

Stockport was once the capital of the UK’s hatting industry. In 2000 the country’s first and only museum devoted to hats and hat-making opened in one of the town’s former hat making mills.

Stockport Viaduct boasts 27 arches and dominates the town centre. When completed at the beginning of the Victorian era it was the largest viaduct in the world.

There’s a good choice of cinemas in Stockport. The centre boasts the historic Plaza plus the Light Cinema at Redrock. A little further away are the Regent in Marple and Savoy in Heaton Moor.

Stockport’s main shopping centre is the Merseyway. Part-covered and part-pedestrianised it is home to around 100 high-street stores including Debenhams and Marks & Spencer.

Stockport boasts one of the best markets in North West England. The Victorian Market Hall, a speciality Produce Hall and a traditional street market offer more than 200 stalls. Market days are Tuesday, Thursday, Friday, and Saturday.

The Peel Centre is the town’s main retail park.

Stockport is just off Manchester’s orbital motorway, the M60.

Stockport has one train station, situated in the town centre. It’s on the West Coast Main Line giving easy access to Manchester, Birmingham and London. 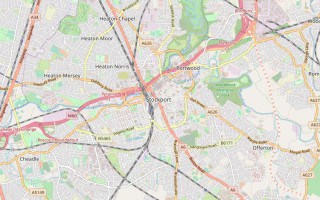